Compare Enche' Biskut with the other gingerbread man in Pic 3. 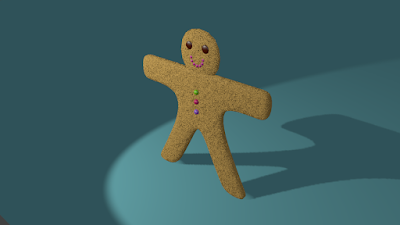 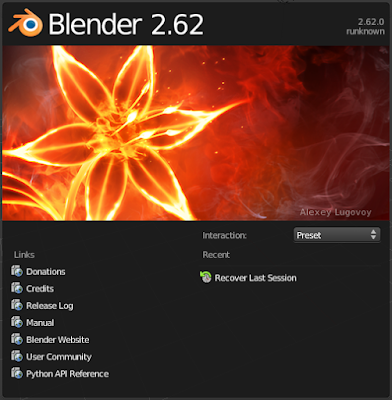 
Enche' Biskut's texture wasn't created on purpose to look that way. I just don't know where I got the steps wrong.


Tryout the gingerbread man tutorial here:
Your First Animation in 30 plus 30 Minutes Part I
http://wiki.blender.org/index.php/Doc:2.6/Manual/Your_First_Animation/1.A_static_Gingerbread_Man


Assalamualaikum warahmatullah. My husband wanted to use the Z Notation domain antirestriction symbol, see Pic 1, in his assignment.


I was unable to do a thorough search in the list of fonts in LibreOffice Writer because the Special Character dialog hang for unknown reasons. Up to that point there was no similar symbol to be found. I shutdown his laptop then moved-on to my laptop to do an online search.

Scrolling through the list of symbols here:
Unicode Characters in the 'Symbol, Math' Category
http://www.fileformat.info/info/unicode/category/Sm/list.htm
... I finally found the symbol. See Pic 2. 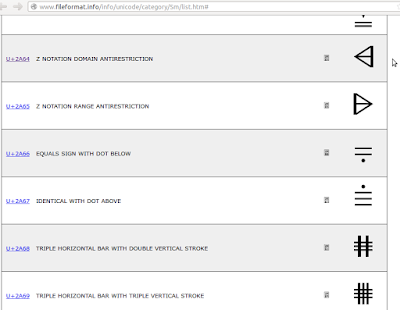 Pic 2 - List of math symbols, before installing the necessary font. In the rightmost column are images of the symbol. In the column next to the images are the symbols as displayed by the browser.

Part A: Test your browser

To check whether or not your brower supports the symbol in Pic 1, simply click this link:
Browser Test Page for Unicode Character 'Z NOTATION DOMAIN ANTIRESTRICTION' (U+2A64)
http://www.fileformat.info/info/unicode/char/2a64/browsertest.htm

Pic 3 means:
"You don't have the font in your system so the symbol is not displayed correctly in the browser."

Pic 4 means:
"You have the font in your system so the symbol is displayed correctly in the browser."

Proceed if you need to install the font.

To check the fonts in your system that supports the symbol in Pic 1, see Pic 5, simply click this link:
Local Font List
http://www.fileformat.info/info/unicode/font/fontlist.htm?text=⩤+-+Unicode+Character+'Z+NOTATION+DOMAIN+ANTIRESTRICTION'+(U%2B2A64) 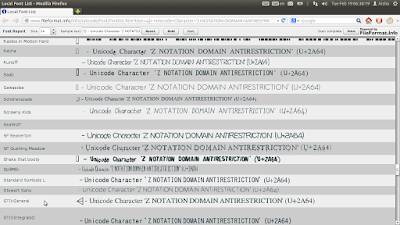 Pic 5 - Checking local fonts, after installing a font that supports the symbol in Pic 1.


Prior to this post, no fonts in my system can display the symbol correctly. So a font that supports this symbol needs to be installed.

Click the View All text-link to preview the symbols in the list of fonts installed on the FileFormat.Info server that supports the Z Notation symbols, see Pic 6, here:
Z NOTATION DOMAIN ANTIRESTRICTION (U+2A64) Font Support
http://www.fileformat.info/info/unicode/char/2a64/fontsupport.htm

Pic 6 - Among the fonts that support the Z Notation symbols. From the FileFormat.Info website.


Among the fonts that supports the Z Notation characters are:

Note that only the bolded fonts are available in Ubuntu Software Center.

In Part C, I chose to use the STIXGeneral-Regular font.

The search results will auto-filter.

Pic 7 - Refer to Step 2. Searching for the package.


A. Click the Install button (see Pic 7) to install right-away.


B. Click the More Info button (see Pic 7) to read more about the package and click the Install button later. See Pic 8.


5. After the installation process is completed, either:
- test your browser, refer to Part A; or
- try the local font check, refer to Part B, (the STIXGeneral font is used in Pic 5); or
- try-out the newly-installed font in LibreOffice Writer.

Alhamdulillah. Wassalam.
Posted by Gula "gulaley" Kapas at 6:26:00 AM No comments:

How To: Solve Warnings and Badboxes in LaTeX


Assalamualaikum warahmatullah. Inspired by this statement:


... I would never accept a final PDF where there's some Overfull \hbox.

Source: Do I have to care about bad boxes?
In answer by egreg
http://tex.stackexchange.com/a/50838

... I decided to solve all the warnings and badboxes in my thesis although there is no problem at all to produce a PDF output (PDFLaTeX).


1. Overfull \hbox messages tell you that some line sticks out over the right margin;

2. Underfull \hbox messages tell you that some line is poorly typeset (or that you've improperly used \\ to leave a vertical space (for example, typing two \\ in a row);

3. Underfull \vbox messages usually tell you that a page is poorly typeset.

Source: Do I have to care about bad boxes?
In answer by egreg
http://tex.stackexchange.com/a/50838

Read the answers here to know a little bit more about the badboxes:
What are underfull hboxes and vboxes and how can I get rid of them?
http://tex.stackexchange.com/questions/138/what-are-underfull-hboxes-and-vboxes-and-how-can-i-get-rid-of-them


About the badness number:


Similar are \hbadness and vbadness which are a measure of how bad a box is, typically how much white space has had to be stretched. the exact number is not usually that relevant but 0 is good and 10000 is infinitely bad (TeX's badness calculation arbitrarily forces any very bad boxes to this amount).

Source: Do I have to care about bad boxes?
In answer by David Carlisle
http://tex.stackexchange.com/a/50850


My suggestion is to solve the warnings as much as possible first, and then solve the badboxes.

Part A: The draft

As suggested by Otis:


If you use draft mode (\documentclass[draft]{article}) you can see black lines on the side of your document where there is overfull hbox badness. This is a convenient way to find and fix these errors. – Otis Jul 26 '10 at 19:54

Source: What does “overfull hbox” mean?
In comment by Otis
http://tex.stackexchange.com/questions/35/what-does-overfull-hbox-mean#comment21_39 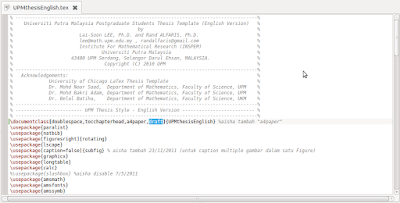 
2. Compile the document by Build > Compile > PDFLaTeX for the first compile. See Pic 4.

The following compiles can use the Build > QuickBuild. See Pic 5. 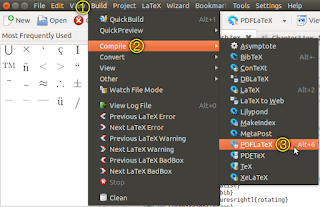 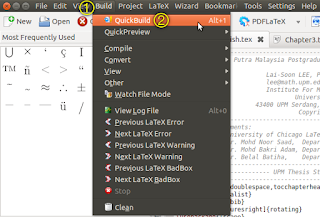 
Don't worry when the figures in the output document are substituted with a thin black-bordered hollow rectangle, see Pic 6. Compare Pic 6 with Pic 7.

If you seem to get errors when previously there weren't any errors, try running this step (QuickBuild compile) a few times. Try about 3 to 4 times or more until you get about the same amount of warnings and badboxes as you had before changing the document into a draft.

Pic 7 - Refer to Step 2. The original/finished document as viewed in Okular.


3. Make the necessary corrections to solve the warnings and badboxes. Refer to Part B to Part G in this post.


4. As this "drafting" step is temporary, the draft term added in Step 1 should be removed after the required corrections are completed in order to return to the 'print'/'real' mode.

Part B: "Shell escape feature is not enabled."

One of the warnings that might arise in Kile from Step 2 is the "Shell escape feature is not enabled." warning. See Pic 8.


By solving the shell escape warning, this deducted 1 warning for me. See Pic 9.

Then under the Select a tool column, select PDFLaTeX.

Go to the General tab. In the Options: field, change from this:
-interaction=nonstopmode '%source'

... to this:
-interaction=nonstopmode -shell-escape '%source' 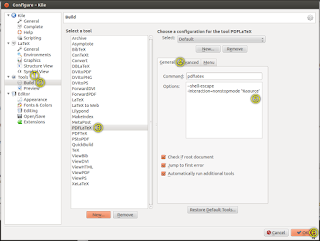 Source: `h' float specifier changed to `ht' warning when not attempting to specify a float
In answer by Stefan Kottwitz
http://tex.stackexchange.com/a/1527


Usually h is too strict. This way you don't allow top, bottom or page placement. Use at least ht instead, or relax it to htbp or even !htbp if you like. If you really need it to be exactly "here", use the H option together with the float package. There are further ways. But adding placement options is usually fine.

Source: LaTeX Warning About Height, \hbox, and \vbox, and ht
In answer by Stefan Kottwitz
http://tex.stackexchange.com/a/6983


8. Check the float specifiers in the *.tex files.

Pic 13 - Refer to Step 8. Float specifier for a figure in my thesis.

My suggestion is: change the float specifier for one figure or table at a time then compile. If the number of warning goes down, only then proceed to the next figure or table.

Fixing the "No positions in optional float specifier." warning (see Pic 14) should reduce the number of warnings.

Pic 14 - The "No positions in optional float specifier." warning.


I use sidewaysfigure and sidewaystable. Previously i didn't use the float specifier for the sideways because if I used an unsuitable specifier, LaTeX will lump all the figures at the end of the chapter instead of placing them where I have placed them throughout the chapter.

If you put in a suitable specifier, the warning goes away and the object (figure/ table) stays where you want it to be.

Pic 15 - Refer to Step 10. The float specifier for a sidewaysfigure in my thesis.

My suggestion is: change the float specifier for one figure or table at a time then compile. If the number of warning goes down, only then proceed to the next figure or table. 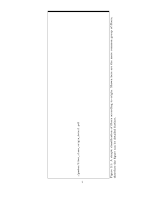 Pic 16 - Refer to Step 11. The sidewaysfigure in draft mode.

Pic 17 - Refer to Step 11. The sidewaysfigure in print mode.


You did nothing wrong. TeX tells you that it does not have Small Caps bold Computer Modern font, so it switches to bold normal font. This is a design decision by font author (Knuth) not to have this variant; you may try to find fonts that have bold small caps (not that I know of such) or to fake the effect using uppercase.

Actually your line is already in uppercase, so I wonder whether you really need small caps: usually people use small caps with lowercase letters, with \textsc{\MakeLowercase{...}}

Source: A problem with \textsc
In answer by Boris
http://tex.stackexchange.com/a/37620

12. There are 2 solutions I can think of, attemped, and worked for me:

A. The solution I used in my thesis is to remove the Small Caps code, \textsc and simply type in all capitals. See Pic 19.

Fixing the "Overfull \hbox (##pt too wide) in paragraph" badbox (see Pic 21) should reduce the number of badboxes.


About fixing the Overfull \hbox:

@alfC Some small text editing usually solves the problem. I use to say that very rarely the first or even the fourth version of a text has so polished a prose that it's become untouchable. :) – egreg Apr 5 at 19:40
http://tex.stackexchange.com/questions/50830/do-i-have-to-care-about-bad-boxes#comment105386_50838

@alfC That's one of the possibilities. In some case just altering the word order can help; adding or removing a "that"; applying a hyphenation that TeX wouldn't have chosen; … – egreg Apr 6 at 8:58
http://tex.stackexchange.com/questions/50830/do-i-have-to-care-about-bad-boxes#comment105507_50838

Source: Do I have to care about bad boxes?
In comments to egreg's answer
http://tex.stackexchange.com/a/50838

14. Scroll in the drafted output (refer to Part A) to look for a thick black vertical (with respect to the text direction) line. These thick lines mark the items that exceed the right-hand margin.

Pic 23 - Refer to Step 14. Example of an overfull sidewaysfigure. 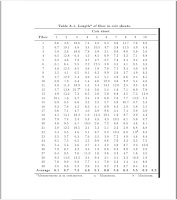 Note that these are only suggestions of what-to-do to overcome the badboxes. Adjust accordingly to suit your needs.

A. If it's a figure, scale-down the figure.


B. If it's a table, adjust the cell size, or font size, or wording.


C. If it's texts, adjust the horizontal space for the text, or change the wording, or add hyphenation.

Source: When to use \par and when \\
In reply by David Carlisle
http://tex.stackexchange.com/a/82666


The usual mistake is *ending* a paragraph with \\

As I did just above -- with a blank line or \par following after \\. People do this to increase the paragraph separation, when they should instead set \parskip.  The underfull box arises because the paragraph-fill space (\parfillskip) is discarded when a totally empty line occurs.

If you *begin* a paragraph with \\ (\\ after a blank line) LaTeX complains explicitly.

About the \\ (double backslash):


The intent of \\ is to fill with whitespace and produce a linebreak. Maybe you are thinking of \linebreak rather than \\ (or \newline).

Initially I used \\ at the end of paragraphs like in Pic 26.

Then I used \vspace and \par at the beginning of paragraphs like in Pic 27.

In the end I used \vspace and blank lines. I didn't use \setlength{\parskip} because it upsets the spacing-between-paragraphs of the whole document whereas I want it to effect only the chapters; fine-writing the template might be able to make it work as needed. So to obtain the spacing-between-paragraphs, I used \vspace{8.0 mm}. The extra blank lines are for my own readability.

Note that I use \\ in a list or any text that has no blank lines in between. See Pic 29.