How to solve wireless-disabled-by-hardware-switch problem

Assalamualaikum. Being back in my hometown (balik kampung!), i tried to establish a connection from my laptop to my mother's Wi-Fi. Unfortunately, it shows in the Network Connections menu that, see Pic 1:


wireless is disabled by hardware switch 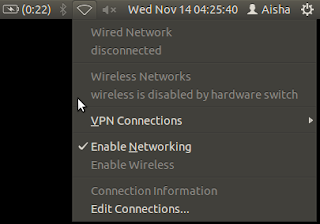 Pic 1 - The Network Connections menu in the Panel. No wireless connection.


Searching for the nearest LAN (local area network) cable i can get my hands on, my brother borrowed me his USB wireless adapter instead but the device was not detected by my laptop. So i had to borrow my brother's LAN cable. The cable was detected upon being plugged-in.

The only switches on this laptop, a Lenovo IdeaPad Z470, are two; one for graphic acceleration and one for network (bluetooth and wireless).

In the BIOS (Basic Input/Output System) I even tried disabling something (forgot what it was :D), reboot, then enabled what i disabled, reboot and gave the wireless a try -- didn't work.

This problem has probably been around me for sometime, only i didn't notice it because i use cable all the time. I even insisted that my husband setup a second router nearby so that i can plug-in from there ^^

This solution is for those who have Ubuntu setup to dual boot with Windows. Yes, Microsoft Windows!

Could this wireless problem be something faced by those who have dual boot?


1. Reboot the device to startup in Windows.


2. Flick the the physical (hardware) network switch ON. See Pic 2.

If it's already ON, switch it OFF (see Pic 3) then ON again.

Pic 2 - Refer to Step 2. The network switch turned ON.

Pic 3 - Refer to Step 2. The network switch turned OFF.


3. Try connecting to a wireless network. --This is to make sure there is no problem your computer's network card.


4. Reboot to startup in Ubuntu.


5. Check the wireless connection. It should work this time. See Pic 4. 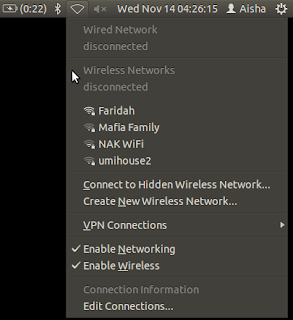 Pic 4 - Refer to Step 5. The Network Connections menu in the Panel. Welcome back, wirelesses!

To simulate the problem:

i - reboot into Windows

iv - try to connect via wireless

The only downside if i leave the network switch ON is, i have to softly (software, via the Panel) disable the bluetooth after every startup. Otherwise i can turn OFF the switch and forget about the bluetooth.

If somehow you flick the network switch OFF then after the next startup you want to use the wireless: flick the switch ON then Log Out then Log In. Reboot if logging in and out does not work.